Christ’s resurrection from the grave changed everything. Seriously. Everything. Easter marks a cosmically epic event and yet it enters and exits our calendars quickly. So several years ago I intentionally slowed my life down to focus on the implications of what Christ’s victory over death means for this world and for my life.

In the spring of 2009 I gathered up my favorite quotes on this important theme to read and study in the month leading up to Easter. A year later I posted the quotes online for others to do the same. Friends who used the collection — and who were introduced to a number of new books and authors for the first time by it — recently encouraged me to expand the document with more of my findings during the intervening years. So I did.

You can download it here: Easter Changes Everything: A Theological Devotional (2015). 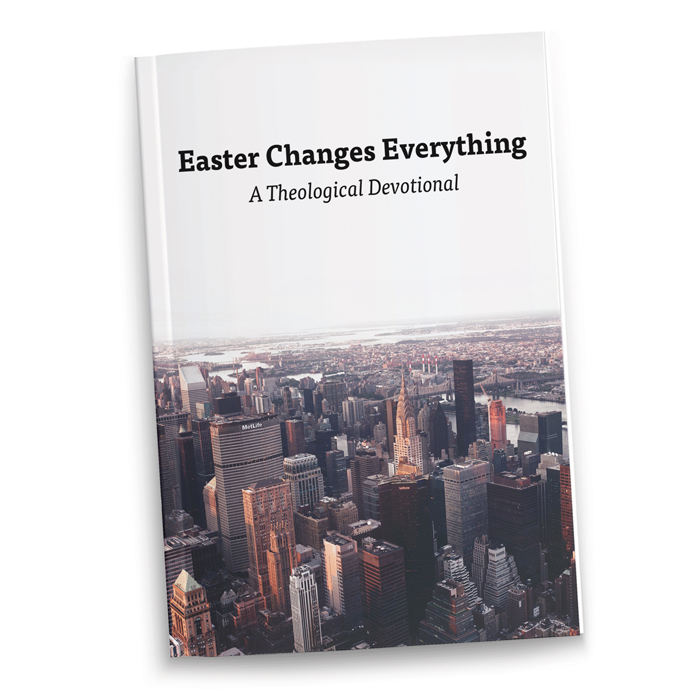 In the weeks leading up to Easter I like to set aside time to reflect on the resurrection of Christ, how it inaugurates the New Creation, and how this profound moment in cosmic history shapes all the Christian life and ethics. I’ll have more on this later (and an ebook to share on March 5th).

For now, here’s a gem from Russell Moore’s article, “The Gospel According to Jane Roe: Abortion Rights and the Reshaping of Evangelical Theology,” published in The Southern Baptist Journal of Theology 7.2 (2003): 44–45.

Evangelicals do not have biblical warrant to disengage from the life-and-death issues of the public square in order to pursue an “other-worldly” and “wholly spiritual” endeavor of rescuing souls from the created order. The Christian doctrine of salvation is rooted in the creation purposes of God, as well as in the eschatological telos of creation in the restoration of the image of God (Rom 8:29) and the regeneration of the entire cosmos (Eph 1:10).

This informs evangelical engagement on issues such as abortion because, as ethicist Oliver O’Donovan observes, the resurrection does away with any notion that Christian theology mandates a negation of the bodily and material aspects of created reality.

A creational understanding of the gospel as revealed in the new creation begun in the resurrection, therefore, demands that Christians embrace a holistic concern for humanity. By refusing to bifurcate the body from the soul, a Kingdom-oriented soteriology might have well served an evangelical theology taken off-guard by Roe.

By envisioning the mission of the Kingdom as encompassing concern for both body and soul, and by seeing Kingdom priorities as including both the justification of the wicked and justice for the innocent, evangelical theology might have been better prepared for the cultural upheaval that led to the debate over abortion rights.

This holistic interrelationship between creation and salvation would also serve as an impetus for evangelical theology to engage vigorously other matters of human dignity, which are mounting as reproductive and human cloning technologies proliferate.

Sammy Rhodes serves as RUF campus minister at the University of South Carolina, and he moonlights as one of the wittiest comedians on Twitter (@sammyrhodes). He recently talked humor with Alex Early on the Acts 29 Podcast (MP3).

In the following transcribed excerpt, Sammy explains why he turned to Twitter and the redemptive value of laughter in the Christian life:

The way this started for me, trying to be funny on Twitter, was a dark time in my family. Our youngest daughter had a condition called Dandy-Walker Syndrome, a relatively new diagnosis, a rare brain condition where her cerebellum didn’t quite develop like it should, creating swelling and excessive fluid of the brain. Nobody knew what would happen. She could die soon after she was born. She would probably need a shunt to drain excess fluid, and she could live, and you wouldn’t even notice the condition for her whole life.

It was in this dark time in our family when humor was needed. I think if you listen closely enough to laughter you will hear echoes of hope. We didn’t know what God was going to do. We knew he loved us. We knew we could trust him.

There’s a hopefulness in humor that we needed — I needed, and I think my wife, too. . . . But that’s when I really started to try to be funny on Twitter, because I almost needed to laugh a little bit in the name of the hope that comes from trusting in Jesus and belonging to him.

There’s that scene in Lord of the Rings, the last book, after the ring has been destroyed, and [Tolkien] says, “Gandalf laughed and the sound was like music, or like water in a parched land.” That’s the image of laughter — it’s hopefulness.

God is on the throne. God has begun making all things new in the resurrection of Jesus, and that frees us up to laugh in hope, to laugh in the face of dark things and hard things, appropriately. . . .

Laughter is a reminder to one another that it’s going to be okay, not because that’s a cliché thing to say, but because truly for us as believers we really do belong to Jesus. He really is raised from the dead. He really is taking us somewhere. And he really is using every hard, broken thing in our lives — even our own brokenness — to sanctify us and grow us and to bring good into our own lives and into the world.

Amen. This conversation with Sammy reminds me of a conversation over “jovial Calvinism” at the 2013 DG National Conference. I’ll post that tomorrow.

I find it tragically easy to dislocate my pursuit of daily holiness (spiritual disciplines and progressive sanctification) from the broader picture of God’s redemptive plan over my life in Christ. Our hope of future resurrection must not negate the value of our daily progress, just as our daily progress must not diminish our hope for the incredible transformation that must happen to us in resurrection. Murray J. Harris explains this well in his textual notes on 2 Corinthians 4:16 in his excellent commentary (page 360):

For Paul, the spiritual body was not simply the state of the renewed “inner self” at the time of the believer’s death, but it seems a priori likely that he saw a relationship between the two, that he regarded resurrection not as a creatio ex nihilo, a sudden divine operation unrelated to the past, but as the fulfillment of a spiritual process begun at regeneration.

The daily renewal of the “inward person” (4:16) contributed toward the progressive transformation of the believer into the image of Christ (3:18) in a process that would be accelerated and completed by resurrection. Paul does not explicitly say that his ἔσω ἄνθρωπος [inner being] is the embryo of the spiritual body or bears its undeveloped image, but the natural transition of his thought from 4:16 to 5:1–4 shows that this sentiment would have been congenial to him.

As a result of the final convulsion of resurrection, the butterfly of the spiritual body will emerge from the chrysalis of the renewed “inner person.”

I’m of the opinion that great quotes on the resurrection are never out of season. This one comes from G. K. Chesterton’s The Everlasting Man, as taken from The Collected Works of G. K. Chesterton (Ignatius; 1986), 2:344–5:

They took the body down from the cross and one of the few rich men among the first Christians obtained permission to bury it in a rock tomb in his garden; the Romans setting a military guard lest there should be some riot and attempt to recover the body. There was once more a natural symbolism in these natural proceedings; it was well that the tomb should be sealed with all the secrecy of ancient eastern sepulture [burial] and guarded by the authority of the Caesars.

For in that second cavern the whole of that great and glorious humanity which we call antiquity was gathered up and covered over; and in that place it was buried. It was the end of a very great thing called human history; the history that was merely human. The mythologies and the philosophies were buried there, the gods and the heroes and the sages. In the great Roman phrase, they had lived. But as they could only live, so they could only die; and they were dead.

On the third day the friends of Christ coming at daybreak to the place found the grave empty and the stone rolled away. In varying ways they realized the new wonder; but even they hardly realised that the world had died in the night. What they were looking at was the first day of a new creation, with a new heaven and a new earth; and in a semblance of the gardener God walked again in the garden, in the cool not of the evening but the dawn. 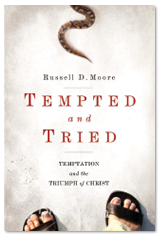 The following is one my favorite Easter quotes and I clip it from Russell Moore’s book Tempted and Tried: Temptation and the Triumph of Christ (Crossway, 2011). This excerpt is worth a slow and meditative read (perhaps in a sermon?) —

Part of the curse Jesus would bear for us on Golgotha was the taunting and testing by God’s enemies. As he drowned in his own blood, the spectators yelled words quite similar to those of Satan in the desert: “Let the Christ, the King of Israel, come down now from the cross that we may see and believe” (Mark 15:32). But he didn’t jump down. He didn’t ascend to the skies. He just writhed there. And, after it all, the bloated corpse of Jesus hit the ground as he was pulled off the stake, spattering warm blood and water on the faces of the crowd.

That night the religious leaders probably read Deuteronomy 21 to their families, warning them about the curse of God on those who are “hanged on a tree.” Fathers probably told their sons, “Watch out that you don’t ever wind up like him.” Those Roman soldiers probably went home and washed the blood of Jesus from under their fingernails and played with their children in front of the fire before dozing off. This was just one more insurrectionist they had pulled off a cross, one in a line of them dotting the roadside. And this one (what was his name? Joshua?) was just decaying meat now, no threat to the empire at all.

That corpse of Jesus just lay there in the silences of that cave. By all appearances it had been tested and tried, and found wanting. If you’d been there to pull open his bruised eyelids, matted together with mottled blood, you would have looked into blank holes. If you’d lifted his arm, you would have felt no resistance. You would have heard only the thud as it hit the table when you let it go. You might have walked away from that morbid scene muttering to yourself, “The wages of sin is death.”

But sometime before dawn on a Sunday morning, a spike-torn hand twitched. A blood-crusted eyelid opened. The breath of God came blowing into that cave, and a new creation flashed into reality… (124–125)

Let that sink in deep.