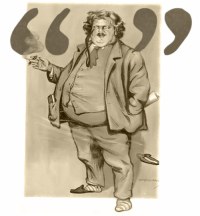 Whether you love him or hate him you cannot help but love him. G. K. Chesterton that is.

In the past I’ve featured a series of favorite Chesterton quotes on the blog (which explains the graphic to the right). Many of those quotes I pulled directly from my favorite Chesterton title, Orthodoxy, a book that celebrated its 100th anniversary a few years back. And I must be behind on my blog reading because I just came across a tribute by Ralph Wood. Wood writes:

G.K. Chesterton’s most renowned book is a hundred years old. Orthodoxy was first published in London by John Lane Press in 1908, and it has never gone out of print—with more than two dozen publishers now offering editions of the book. Graham Greene once described it as ‘among the great books of the age.’ Etienne Gilson declared that Chesterton had a philosophical mind of the first rank. Hugh Kenner said that the only twentieth-century author with whom Chesterton could be compared is James Joyce. And Dorothy Day was inspired to return to Christianity mainly by reading Orthodoxy. Indeed, we might say that the last century belongs to Chesterton—for in that now one-hundred-year-old book, Orthodoxy, he remarkably prophesied the ailments of both modernism and postmodernism, while adeptly commending Christianity as their double cure.

Wood’s article is a good read. Chesterton’s book is a fun read (if you can stomach the wrongheaded assumptions about Calvin and Calvin’s theology). And it is a book that has been said to cure insanity. It’s a classic and there are many different versions available online.